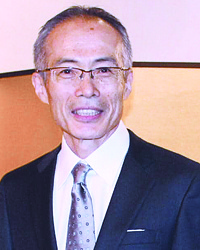 H.E. Takaoka Masato, Ambassador of Japan to the State of Kuwait

Kuwait City, Nov 17: The Embassy of Japan organized a washoku (Japanese cuisine) meeting at the ambassador’s residence yesterday, part of events to mark the 60th anniversary of the establishment of diplomatic ties between Japan and Kuwait. This is the first ever event by the embassy with a focus on Japanese food, and also the first meeting since the start of the corona virus pandemic. Japanese restaurant owners and representatives also gave presentations about Japanese food and their restaurants and experiences at the event.

Ambassador Takaoka Masato warmly welcomed the participants. “As we celebrate this important milestone, there is no doubt that one of the most successful stories that bind our two countries together in friendship and culture is Japanese food. People in Kuwait always smile when they talk about sushi, for example. Japanese food is a powerful cultural ambassador of Japan. That is why I wanted to organize an opportunity to convey our great thanks and admiration to all people, owners and managers of Japanese restaurants, Japanese cafes and Japanese food suppliers for the most valuable contributions to the promotion of Japan-Kuwait relations,” Masato said.

“I am sure that the popularity that Japanese food enjoys now in the Kuwaiti society was not achieved easily. It must have taken a long time since the first Japanese restaurant in Kuwait — Kei — opened in 1981. The Kuwaiti food culture had to change. I heard that 40 years ago, people in Kuwait had not yet developed a habit of dining out. Therefore, there were not many restaurants in the first place. Japanese food must have been very remote from the taste that the Kuwaitis were used to. Of course, it must have required enormous efforts and commitment to bring good Japanese food supplies and talented people and match Japanese food to Kuwaiti trends,” he added.