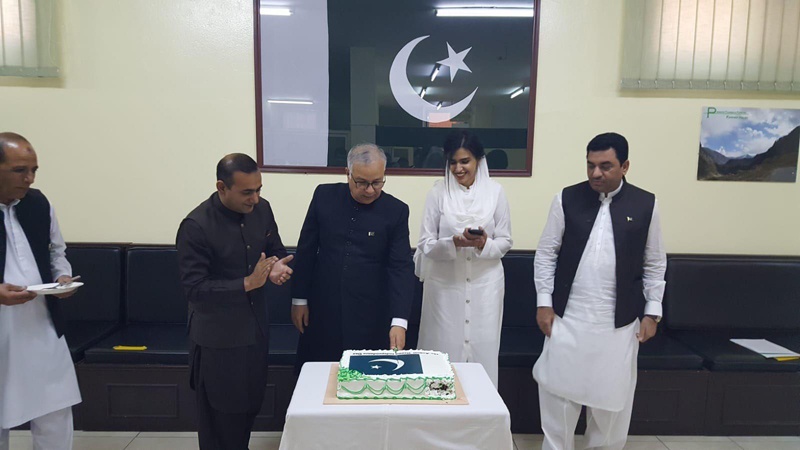 KUWAIT: On the auspicious occasion of the ’75th Independence Day of Pakistan’, the Embassy of Pakistan organized a flag hoisting ceremony at the chancery. Adhering to restrictions on public gatherings owing to COVID-19, the occasion was restricted to members of the embassy.

Ambassador of Pakistan to Kuwait Syed Sajjad Haider paid tribute to the forefathers of the nation, “who played a formidable role in realizing the dream of independent state for the Muslims of sub-continent into reality.” The ambassador also highlighted the sacrifices rendered by the forefathers to protect and safeguard the made for the creation of a separate homeland for the Muslims of the sub-continent.

Ambassador Sajjad extended felicitations to the community members and urged them to work diligently on the guiding principles of “unity, faith and discipline”. He emphasized on the role played by overseas community members in various parts of the world. He also paid tribute to the frontline health-workers and professionals as well as to “those sons of soil who sacrificed their lives while protecting the ideological and geographical boundaries of the motherland.”

Owing to COVID-19 related restrictions, various interactive activities were undertaken in collaboration with the Pakistani community members to celebrate the Independence Day. In this regard, the ambassador was invited as a chief guest in a blood donation drive organized at Adan Hospital as well as an Independence Day function organized by ‘Urdu Language Congregation’, a Pakistani Christian Community in Kuwait.