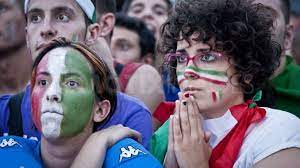 Italians vehemently fluttered their flag atop

At the very outset let me pronounce it very clearly in quite crystal-clear terms without slightest shadow of doubts whatsoever that I am neither an Italian nor even a resident of Italy and more over hard truth is that I am not a footballer either but yet as a Pakistani living in Kuwait I do very much watch and enjoy football, cricket and hockey matches.

Yesterday Sunday 11th July, 2021, I have watched truly very high-profile Euro final played between England and Italy in London, UK. As an outsider, neutral and judicious person I will quite categorically comment purely on its merits and merits alone with no personal interest whatsoever, both hidden or apparent, to be honest to you. I simply cannot help saying even on solemn oath that numerically, emphatically and categorically speaking, Italy should have won the final match with big much bigger margin and that too right even during its initial 90 minutes’ match to tell you the truth and absolutely there was no need at all either for playing extra time or even resorting to penalty shoots for that matter but, one way or the other, wind was blowing against the foreign visitors and, therefore, eventually the luck did not favor Italy which did shock many football lovers of different nationalities watching the match live at different topographical locations worldwide including me in Kuwait to be honest. I, to corroborate my statement, dispelling any ambiguity and doubts will now enumerate undeniable and irrefutable facts and figures on merit and merit alone to spell out overtly, distinctly and incontrovertibly as to who is who when it comes to Euro Final 2021.

Statistical figures of course not calculated by me, as a few may think of, were computed and displayed on the screen during the match under different heads outstandingly prove that right from the whistle itself, Italy did surpass England on more than one count which itself proved and justified as Italians succeeded in breaking the defense of England and shots 19 times against its opponent whereas on the contra, England in sheer retaliation could shoot 6 times only. When it comes to accuracy, Italy very authentically attempted to net a goal 6 times which undoubtedly very smartly and professionally have been saved by English goalkeeper while on the other hand, England ventured the same just twice only. Italy possessed the football to the extent of 66% whereas on the other hand England succeeded in keeping the football with them up to 34%. Italy passes figure is as high as 823 whereas it is just 424 when it comes to England for that matter. Such uncontestable figures themselves speak clearly, audibly and distinctively that under such given circumstances, as explained and elucidated above, the visiting Italian national heroes had very rightly deserved and earned the victory to outclass their opponents right before their own nears and dears.

Needless to mention, England had absolutely very big advantage of home crowd which is always moral boosting and igniting for the home players but, very much regretfully, English players in general and its forwards along with wingers in particular have utterly failed to capitalize the such big advantage to score goals.