BREAKING NEWS
GMT+2 09:01
Home Diplomat NATIONAL DAY RECEPTION BY THE EMBASSY OF THE REPUBLIC OF KOREA 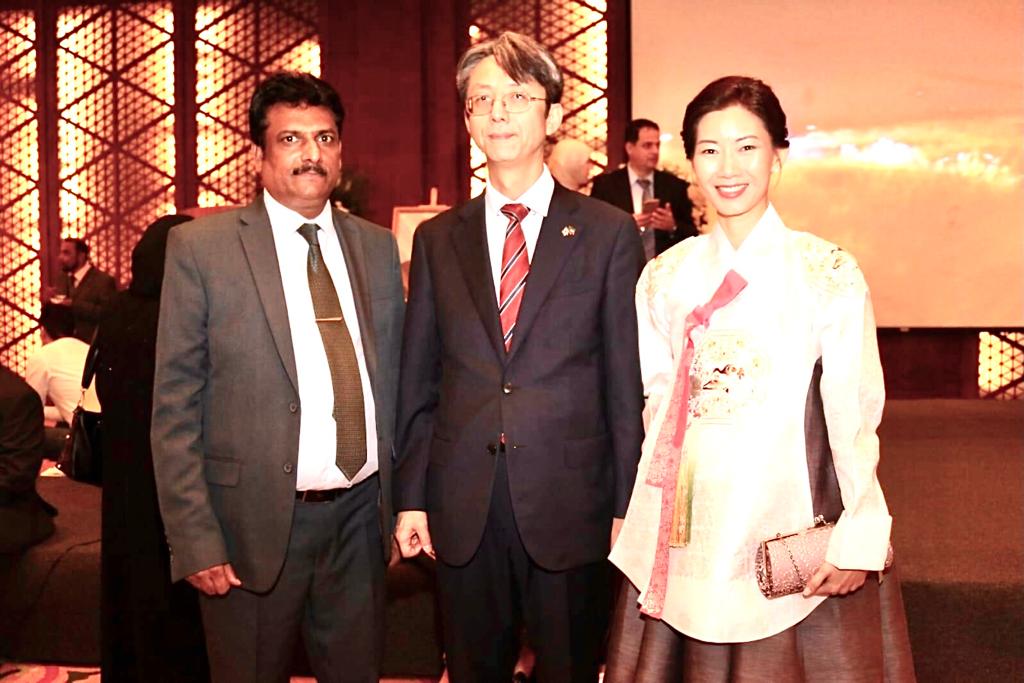 NATIONAL DAY RECEPTION BY THE EMBASSY OF THE REPUBLIC OF KOREA

Embassy of the Republic of Korea holds National Day reception

KUWAIT: Ambassador of the Republic of Korea HE Dr Hong Youngki held a reception at Badriah Ballroom, Jumeirah Hotel on October 2 to mark the National Foundation Day and Armed Forces Day of his country.

Mazza Mutliq Al-Alati from the Kuwait military, Korean Military Col Kim Taekyun, Republic of Korea Defense Attaché to Saudi Arabia and Kuwait, attended the reception along with a large gathering of diplomats, businessmen, media personnel and South Korean nationals to mark the occasion. A ceremonial cake was cut by Dr Khaled Ali Mohammad Al-Fadhel, Minister of Oil & Minister of Electricity and Water.

Addressing the gathering, Dr Hong pointed said: “It is indeed my privilege and heartfelt pleasure to welcome you all this evening on the occasion of the National Foundation Day of the Republic of Korea. First of all, I would like to take advantage of this happy occasion to extend my best wishes for the continued peace, progress and prosperity for the state of Kuwait.

“In this regard, this year is exceptionally meaningful for the peoples of both countries as we together celebrate the 40th anniversary of the establishment of diplomatic ties between our two countries. The great achievements of our bilateral relations and cooperation in the political, economic, social and cultural fields during the last 40 years manifest our wonderful partnership to work for the greater good of our peoples.”

Dr Hong added that Korea is the largest market of crude oil for Kuwait, while Kuwait is the third largest construction market for Korea. Korean corporations have been contributing to achieving the New Kuwait 2035 vision of His Highness the Amir through their diligent participation in infrastructure projects like Mubarak Al-Kabeer Port, the new refinery project, and Sheikh Jaber Causeway Project, which was recently inaugurated with the honorable attendance of His Highness the Amir along with Korean Prime Minister Lee Nak-yeon.

Minister of Oil and Minister of Electricity and Water Dr Khaled Al-Fadhel expressed satisfaction with “the distinguished level” of relations with South Korea. Congratulating South Korea on its national day, Fadhel told reporters: “This occasion coincides with the 40th anniversary of the special ties between both countries. South Korean companies play an active role in the development of mega projects in Kuwait such as Saad Al-Abdullah City and electricity and water projects.”

Photos from the reception